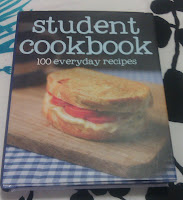 I walked into my Writing Spaces lecture this morning and made my way towards the group of people I usually sit with, only to have one of the girls jump up to meet me, presenting me with random gifts of a cookbook, a lollipop and a... chocipop? (Lollipop made out of chocolate.) Anyway, it was a great way to start the day, so a huge thank you to Emma.

The past two weeks in Writing Spaces has covered creative non-fiction, and we had a couple of really good lectures. The main reading for this writing 'space' was the Calibre Prize essay 'What're yer lookin' at yer fuckin' dog?' by Kevin Brophy, which recounts Kevin Brophy's experience with some bad neighbours and how he relates himself and his situation to the philosophy of violence he'd read in some essays written by Salvoj Žižek. I really enjoyed reading this piece.

Last week focused predominantly on the question 'what is truth?' Our lecturer last week gave us some ways to define and consider truth in writing, such as how the writer's opinion represents or re-presents the facts and how the writer gives the truth a particular perspective. The writer also has to fragment; this means choosing what parts of the story to tell, what not to tell, and what irrelevant and boring details and conversions to exclude. The author's voice portrays the truth in a particular way, according to how the author him or herself wants to portray it.

Keeping in mind that it's creative non-fiction, sometimes the story being told is a metaphor for something else and we are able to find subtexts that may not have been considered in reality when events were taking place. Perhaps the piece is a metaphor that reveals something about people, society, ourselves, or anything really. The resonance of the piece - the parts that stays with you the longest, the parts you can relate to, the parts that make you recall something - is important, especially in the case of creative non-fiction, for the reader to be able to reflect both on what they've read and what they've experienced personally, in reality.

But when reading creative non-fiction and when writing it, how do we know what the truth is and how are we sure that we know it? I think it's a matter of allowing yourself, especially as the writer, to admit that sometimes memories are not always accurate. Kevin Brophy does this in 'What're yer lookin' at yer fuckin' dog?' when his character openly admits that perhaps he is being unfair by recounting only the worst of the bad neighbours' behaviour. This is acceptable, because the writing 'space' is creative non-fiction, not a journalistic article of the events that occurred. Similarly, when I studied the creative non-fiction novel 'In Cold Blood' by Truman Capote in literature last year, it was evident from very early on that Capote portrays the murderer Perry as sort of a good guy, at least to the point where the reader feels sorry for him and forgiving towards him, though not so for his accomplice who is portrayed as a real arsehole.

Overall, I think we learned a lot more in the past two weeks on creative non-fiction than we did in the first two weeks with script writing. The Kevin Brophy essay is an amazing read, and I've chosen to write in response to it for the first assignment, although I'll still try and read the other texts we have the option to respond to.

Have you read or written any creative non-fiction? What did you think?