I've been on a few little adventures in the last couple of weeks.

First, I was invited on a spontaneous road trip to Loch Sport where I hung out near a beach and a lake and got a little sunburned. There was lots of junk food and drinks. Good times were had.

The weekend just been was spent at Phillip Island with two of my best mates from uni, significant others included. Of course, our thesis results were FINALLY released as we were driving there, and I am happy to brag that I did amazingly (I literally pulled over to check my results)! It was not great beach weather, but we went to the wildlife sanctuary where we hand fed some wallabies, kangaroos, and ill mannered emus. And all weather is good weather for a chocolate factory visit (note: do not leave chocolate in a car on a hot day). And the Penguin Parade.  It's not a trip to Phillip Island without the Penguin Parade. 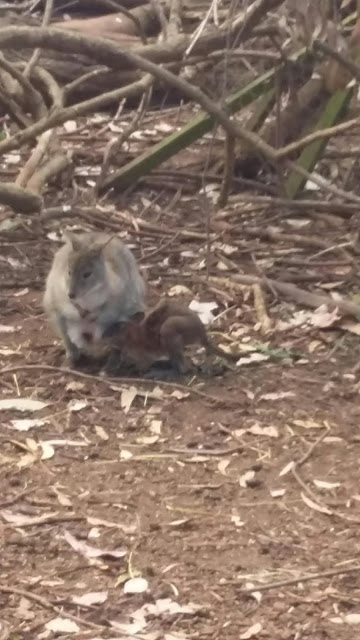 Look at the cute little pademelon and its baby! Squee!

Finally, today I spent a couple of hours bush walking in the Dandenong Ranges with the bf. It was supposed to be a 7-8km hike, but we were rudely interrupted by the sound of distant evacuation sirens which we only determined was a nearby school doing a fire drill AFTER heading back to the main picnic grounds to see if there was a need to leave. Better safe than sorry. Still a fun day.

I need to pull my finger out and start writing things now, get out of holiday mode. My honours supervisor and I are writing an academic paper for a peer reviewed anthology together for fun, but I know it's going to be a bit more work than I've put in so far and I want to do my best. Also, back to general writing endeavours. I NEED to write/edit things.

What have you guys been up to? How are your NaNo projects and other WIPs?

Posted by Bonnee Crawford at 11:55 PM 4 comments: Links to this post

Email ThisBlogThis!Share to TwitterShare to FacebookShare to Pinterest
Labels: writing

In the midst of all the job hunting, attempts at writing, and finding places to submit, I ended up talking to my Honours course director. Who also happens to be the course director of the Masters of Writing and Literature.

Aaaaaaaannnnddddd I enrolled in Masters for 2017.

Apparently, I don't want to stop being a student. My enrollment is still a bit messy. My Honours thesis marks haven't been finalised yet, so I haven't got all of my Credit for Prior Learning registered. But I am definitely going to be able to fast-track the Masters to (hopefully) just one year of coursework towards a Creative Writing specialisation, with editing and publishing units to boot.

I am still job-hunting, but have re-secured a place on the WORDLY team again. Honestly, I wish I had made this decision before the Writers Club AGM, because I would have LOVED to stay on the executive committee for another year. Alas, a new team was elected in September, and although they're a little relieved to hear that I'll be sticking around to support them, I don't want to take this great learning opportunity away from them by over-imposing myself on my old role. I'm excited to see what they'll do with the club and the magazine (and let's be honest, it'll be nice to attend a magazine launch without having to stress over a running-sheet or if we budgeted for enough food).

I was going to hold off confessing this piece of news until my enrollment finished sorting itself out, but it's been over two weeks since I applied, and nearly two weeks since accepting the offer. I think I've been patient enough. Let's see if I can keep up the blogging at least until I start back in March.

How are your writerly endeavours going? NaNoers? All others?

Posted by Bonnee Crawford at 10:53 PM 4 comments: Links to this post

Email ThisBlogThis!Share to TwitterShare to FacebookShare to Pinterest
Labels: university

I've decided not to participate in NaNoWriMo this year. I am in the midst of redirecting my life and I think it's about time I went back to edit some of my old manuscripts instead of cranking out something new.

But I wanted to wish everyone who is participating this year the best of luck! No matter whether you're in it to win it, or just having a bit of writerly fun with a ridiculously supportive online community. Be proud of whatever you accomplish this month and know that it's okay if this isn't your year, or if it just isn't the right way for you to produce a creative work.

Now get off the Internet and write!

Posted by Bonnee Crawford at 10:43 PM 4 comments: Links to this post