Creating a One-Sentence Summary of Your Story

I'm back on res at my university, at long last! This week is ressie o-week, next week is the university o-week, and then the week after that is when our classes finally start. As you can imagine, I am very busy socialising and catching up with returner-ressies and meeting/befriending/trying to mother the new ressies, so I haven't had much time to think of blog posts, much less write them... so here's one I prepared earlier!

I am sure I am not alone in the world of writers in saying, although I am thrilled when people are interested in my writing, I kind of hate it when someone asks me what my stories are about. Thinking of a quick one-sentence summary for your story on the spot is sometimes really hard, especially if you're still in the writing, editing, and redrafting stages. I am among those who do not think of summaries until it's time to start querying. In my head, of course I know what my story is about! But putting that into a coherent one-sentence synopsis for a curious friend, especially on the spot, is really hard. I'm not even sure I could do it once I have started querying.

Anyway, I was talking to a friend about university. He is a bio-med student and so we were asking each other a lot of questions about each other's subjects. Of course, mine led to revealing that I write novels in my spare time. He asked me how many novels I'd written and I told him I'd written three. Then, the dreaded question: "What are the stories about?"

I floundered for a moment when I first read the question and might have cursed at my smartphone a few times. Then I realised that because this wasn't a face to face conversation, I didn't have to panic and rush to give him an answer. I took a few minutes and thought about it, and surprisingly enough came out with a quick little one-sentence summary for each of my three novels. They weren't perfect explanations, but I was pretty proud of them.

'EVERGREEN': In a fantasy world where the magical trees that provide life are suddenly failing, a prophecy names the three children of the emperor as the saviours.

'KATHERINE': A girl starting at a new high school makes two new friends who help her through much family drama.

'WALLS': In an alternative world, a refugee girl meets the son of the rebel group leader responsible for uprooting her family.

They aren't perfect little summaries by any means, but if I can memorise them for future reference, I think they would be sufficient answers for curious friends asking what the stories I've written are about.

What are your stories about? Feel free to leave a little one-line summary in the comments if you can think of one, I'd love to read them!
- Bonnee.
Posted by Bonnee Crawford at 12:54 AM 11 comments: Links to this post

Progress is going slowly, but I just did a bit of editing on the 7th chapter of 'WALLS'. I know there are a few things that I'm going to need to go back to. I let the tension between Mildred and Kovax dissipate too quickly, so I need to pick it up again. I also need to go back and do worldbuilding, but I've decided that stuff can wait until another round of edits, because it's a little too overwhelming to juggle with improving everything else too. I'll dedicate a whole round of edits to worldbuilding some time later in the year. Hopefully I'll get around to it before NaNoWriMo 2014.

In other news, I had another training session at the library to prepare me for working there during the year. The job starts in just over a week and I am so excited! I move back to res on Monday, so I'm going to take some time to go to the library before I start working and familiarize myself with where things are. I get to give tours during orientation week, so I need to have a bit of a better idea of my way around. They gave us our uniforms! We have cool red shirts with "I'm here to help" written on the back of them, and the Deakin logo on the front. I feel so professional and awesome when I wear it. *squee!*

Thanks to the train ride up and back from Melbourne, I'm not 650 pages into A Clash of Kings and aiming to finish it hopefully before I move to res on Monday. That's totally doable! I am really looking forward to moving to res, and now I can add the reason that there is much nicer air there than there is in my hometown, because that stupid coal mine is still on fire and smoke and carbon monoxide levels have been a bit dodgy  lately...

What have all of you been up to? How have your writerly endeavours been going?
- Bonnee.
Posted by Bonnee Crawford at 7:53 PM 10 comments: Links to this post 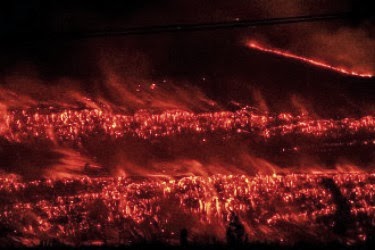 You'd think you were looking into a volcano full of fire and brimstone, but that is actually one of the three local open cut coal mines on Monday night. This one in particular fell in the path of the local fires when preventative measures were not taken. Not so sure how they're planning to put that out, but they better think fast!

Basically, my boyfriend thinks that naming one of the genres 'fantasy' is silly, because one of the definitions is simply 'to imagine the occurrence of', and isn't that what ALL books that aren't non-fiction are? Of course, I had my disagreement and specified that the genre is named for the other meaning of imagining the impossible or improbable.

Well, I heard him out, and he asked me what sort of things make something 'fantasy'. My initial response was an alternative world with mythical creatures like fairies and unicorns and dragons. Then he pointed out that not all books with alternative worlds are considered fantasy, and that not all books with mythical creatures are considered fantasy either. Like I don't consider my own manuscript WALLS a fantasy, although it's in an alternative world, and the Hunger Games is considered Young Adult/Dystopia (and that has mockingjays and mutts, so they count as mythical creatures). Then he asked if I consider creatures like vampires and witches and werewolves fantasy, and I realised that no, I class them as supernatural. Then he asked me what genre I put the Harry Potter series in, and I said fantasy. When I said that, I stopped for a moment and frowned at myself, because Harry Potter has witches and wizards and vampires and werewolves, which I class as supernatural, but I consider those books fantasy.

In the end, I decided that it was down to themes: what the emphasis is on and what kind of emphasis is put on it. Supernatural is dark and scary and you want it to go away (we discussed where the line between supernatural and horror was, but I won't go into that now because I don't want to creep myself out again). Fantasy is meant to leave you in awe of the world you've been presented with.

We came to the conclusion that we need to make some sort of graph to decide where books fall along the line of fantasy, and that fantasy needs to be renamed 'Here Be Dragons'. Of course, I reminded him that his favourite fantasy book(s), The Name of the Wind and The Wise Man's Fear by Patrick Rothfuss, very deliberately doesn't have dragons. And no, the draccus does not count!

So what are you thought on genres and where do you draw the line between ones that are similar?

- Bonnee.
Posted by Bonnee Crawford at 8:13 PM 8 comments: Links to this post 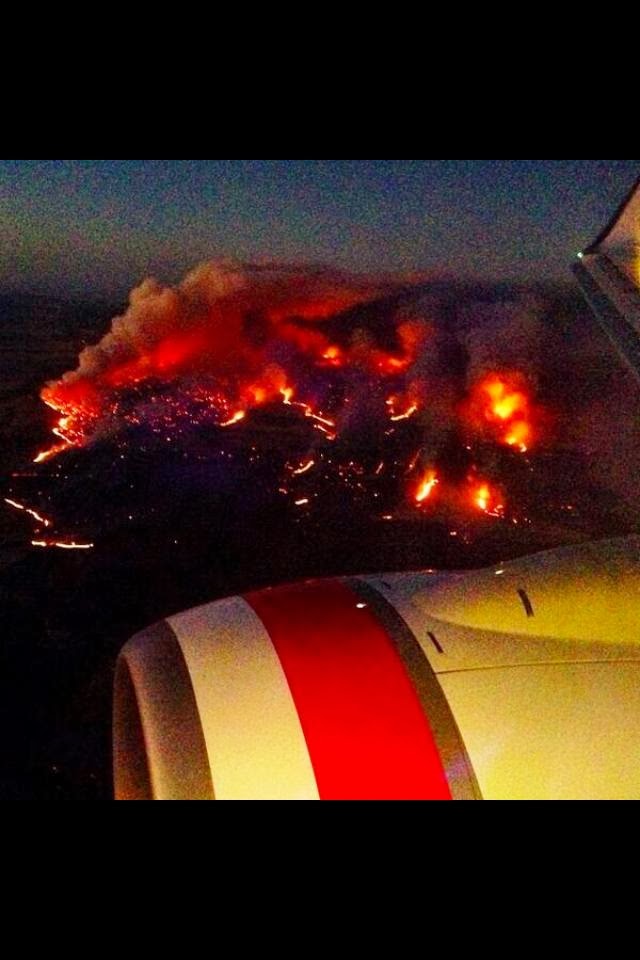 This photo was taken from a plane that was about to land at Melbourne airport.

Now, I'm not currently living in Melbourne, though I was there yesterday morning, hours before this photo was taken. I didn't think to check the Country Fire Authority website before I left, and if I had, I would have stayed where I was, because it would have been safer than the three hour trek home. I very nearly couldn't get all the way home and if I'd taken the later train like I had originally intended, I would have been stuck on the other side of a closed train track and freeway forty minutes from home overnight. By that point, even the back roads had been closed. Luckily, I took the earlier train, and the back roads were still open and a few good souls were carting buses full of stranded passengers from one side of the fire to the other via the back roads while they still could. It was all low visibility and lots of smoke. Hours after I made it home, the areas we'd passed through on buses were told to evacuate.

Yesterday was the worst fire danger day since the Black Saturday bushfires in Feb 2009. My hometown remained safely out of the way... the fire kind of did an arch around us. There is an open cut coal mine on fire one town over, which can't be good news, but I'm relieved that conditions didn't get as bad as they did in '09, at least not as near to me, because that shit was just terrifying.

Conditions are heaps better in my area today, but other places are still in trouble, and things could get worse again any moment.

So basically, don't come to Australia. Especially not Victoria. Everything is on fire.

And the moral of this story? Check the CFA website next time!

- Bonnee.
Posted by Bonnee Crawford at 4:31 PM 10 comments: Links to this post