I guess I disappeared from the blogosphere for a little bit there. Sorry about that! My NaNoWriMo manuscript WALLS drew me in and I couldn't stop writing. The good thing about that is that I hit the 50K word count last night... and kept going for a couple of thousand more words. And November isn't even over yet!

Looking at where I am with this story, I'd say I've got at least another 25K-50K words to go before the whole thing is finished. I'm going to aim to have the first draft complete by Christmas, or at least by the new year. There has been a bit of character establishment and a LOT of character development so far, and Mildred has just made Kovax promise her something, though I won't tell you what the promise was.

In other news, any Avatar: The Last Airbender fans will be interested to hear that I finally found out what happened to Zuko's mother after reading 'The Search', which is part of the official continuation of the TV series in comic book form. I'll have to double back and read 'The Promise' at some point, but I got too excited about finding out what happened to her and skipped ahead.

How are everybody else's November goals for their writing and revising etc going?

A friend shared this little writerly cartoon by Grant Snider with me a few months back (though the first line of frames had been omitted). I thought that it might provide a laugh in the midst of NaNoWriMo, inappropriate as some of the suggestions might be.

Last night I made it over the 25,000 word mark on my NaNoWriMo novel WALLS, putting me four days ahead of word-count schedule. I have a busy next few days, which means I won't have as much time to write as I'd like, so I'm glad I'm a little ahead of where I need to be to make up for it. After today's short write-up, I'm sitting at around 25,500 words, I wrote a paragraph which I thought belong before my original first scene (screw chronology!), and little Stark has just rocked up at Mildred's house with a serious case of shivers after the sudden rain flooded the orphanage. She and Lani are taking care of him.

After gushing about how much I love writing WALLS to my boyfriend recently, I've also decided I'm very obsessed with the story and the characters.

Tomorrow I'm making the trek from my hometown back to my university, where Deakin Writers Club is hosting an open mic event for the afternoon to celebrate a successful first year of existence and the quick growth of the monthly editions of Wordly. I'm taking the chance to participate again, reading something that I wrote a few months back which I've gotten some good feedback on. Hopefully all goes well and I don't get rained on too much on my way there.

How's NaNo going? Been to/participated in any readings lately? Tried any of Grant Snider's performance-enhancing drugs for writers?

I was reminded of a valuable lesson today, which I originally learned six years ago.

In my first year of high-school, I lost a little story I had been working on at school that had only been saved to my memory stick. I left the memory stick on my desk, left the room, and when I came back, it was gone. So was the story.

I started saving the things I wrote in at least two places from then on. Once on my memory stick, and the desktop of the computer I was using at the time. When I got my laptop, I made sure to have a copy on the memory stick and the laptop whenever I could. At one point, I even had a copy on a second memory stick.

In the past year or so, especially in the last trimester of university, I got lazy with saving multiple copies and admittedly only kept a copy on my laptop.

Today, I was typing away at my NaNoWriMo W.I.P WALLS, moments away from hitting 15,000 words (my goal for the day was 15,003), when all of a sudden, my laptop switched itself off without warning! I worked out very quickly that it had overheated... it's a pretty old laptop and I'd left it charging for too long, so it wasn't happy with me. My first thought was, oh no, when was the last time I hit Save in the Word Document? After that, an even more worrying thought occurred... what if my laptop didn't turn back on? Last summer, my little sister's laptop (which she got the same time I got this one) switched itself off with a cloud of smoke rising from the keyboard. I had saved my NaNo to a memory stick on I'm not even sure what day, but it was the only time I had saved it elsewhere and I'd written a few thousand words since.

Luckily for me, my laptop did turn back on and I'd only lost about 100 words after subconsciously hitting Save at the end of the last full paragraph I'd written. I vented my distress and relief to a fellow WriMo over Facebook and she told me that's why she usually uses Google Docs/Google Drive as well as backing everything up on another device... it means there's a copy available wherever you've got internet connection, it's backed up on a hard device or two, and Google Docs has auto-save like Blogger does.

I made a Google Drive account last summer because a friend wanted to share some documents with me for proofreading, so after the near-no-WriMo experience today, I might give it a shot and write straight into Google Docs from now on. We will see how I go!

Lesson/reminder for the day: ALWAYS back up your writing!

My NaNoWriMo-ing is going smoothly and I'm sitting at a little over 15,000 words right now. A little more than a day ahead of schedule! At the moment, Mildred and Kovax have just been dismissed from their third after-school detention in a row for the week and it's raining outside.

Where do you back up your writing? How are your NaNo plans going?

Review: 'The God of Small Things' by Arundhati Roy

Just last week, I read a post on Lynda R Young's blog about reviewing books and thought I'd refer back to it while I wrote this one. 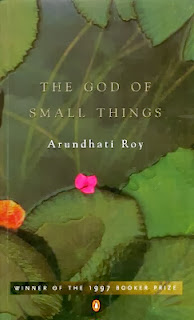 I finally finished reading The God of Small Things by Arundhati Roy a couple of days ago while I was on the train, travelling between my hometown and the city. I started reading this book for one of my university classes back in August, but didn't hurry to finish it because I was not responding to it for my assignment. Although I didn't have to finish it, I'd read and liked enough of it to want to finish it.

Roy's characters are realistic, complex, and well defined. Estha and Rahel, the fraternal twins whose point of view most of the story is told from, are my favourite characters. I found it easy to relate to Ammu's independent ways, which ultimately got her in to trouble and troubled the lives of everyone around her. I loved the Untouchable, Velutha, just as they did, right down to the last sentence of the book.

I love that the plot was revealed in a non-linear way, that started towards the end and then went back and forth a few times until everything made sense. This was pulled off really well. Each time we moved between times, Roy gave us just enough to keep us curious, but not enough for us to guess exactly what happens until the story is over. I don't think I have a favourite part, but one of the most memorable part was the incident with Estha and the orangedrink/lemondrink man at the theatre. I remember, I was reading that scene on another long train ride and had to stop myself from audibly expressing how disturbed and distressed it made me. Even at the very end of the novel, the last scene wasn't from the end of the narrative, but it left the reader on a happier, more hopeful note to balance all the darkness of the end of the narrative. The plot moved along a little slowly at points, especially wherever we stopped to introduce and explain the background of a newly introduced character. However, I couldn't find any of these slowed-down instances that were actually irrelevant to the story; there were certain things that characters did that you needed to know more about them to understand why. Even in these instances, whatever information we were given was unique and interesting.

Roy's story was set mostly in India and the setting here felt like another character. Roy uses very unique descriptions, sometimes gritty and brutally honest, sometimes magically beautiful. Reading it, it was easy to place myself there and visualise everything that was described, sometimes even a little bit more.

Roy's overall style was unique. Along with the non-linear narrative structure that she uses, she also uses really original phrases and descriptions. I think it would have been hard to find a cliche. Some of the ways she worded things surprised me, shocked me. There were a few moments a cliche would have fitted perfectly, but right when you thought you were about to read it, she turned it on its head and gave you something else. A few of these particular wordings became motifs throughout the story. She also used a lot of imagery - again, very original - some of which also became recurring motifs. The story was really beautifully written, and I think that was a big contributor to my wanting to finish it.

Along with the beautiful style, the content of the story is also very original, at least in my opinion. It's not a happy story and it's authenticity is emphasised by Roy's nitty-gritty honesty in everything she includes in the pages. The God of Small Things is a story about how breaking the laws of love ("... who should be loved and how. And how much.") alters the lives of fraternal twins Estha and Rahel, their mother Ammu, the man they all love, and everybody else around them. Their story is dark and disturbing and things get weird at times, but that's all a part of why I loved it.

I definitely recommend this to read.

In other news, it's Day 5 of NaNoWriMo 2013 here in Australia, and the writing I did today has boosted my word count to just over 9,000 words. I am loving the amount of time I am spending with my characters from WALLS, especially Mildred and Kovax, and how well I'm getting to know them while I watch them change and grow on the page in front of me. At the moment, Mildred is having a deep and meaningful conversation on the couch with her friend Lani, and Kovax is nursing the bruises from his most recent schoolyard scuffle... and to think, it's only Tuesday.

Have you read The God of Small Things by Arundhati Roy? How are your NaNoWriMo/NaNoRevisMo/NaNoNoNo goals going?

Edit: Much thanks to P V Ariel for reminding me to make note of the fact that The God of Small Things is the winner of the 1997 Booker Prize for fiction and also reached fourth place on the New York Times Bestsellers list for Independent Fiction. Arundhati Roy's debut novel was a huge success for her.
Posted by Bonnee Crawford at 5:12 PM 16 comments: