Just Going with the Flow

So, I don't feel too well, and the school swimming carnival is tomorrow. What better way to spend my day off than relaxing, editing and writing. Sure, there is some easy-going media homework to be done, but other than that, tomorrow should be pretty laid-back.

I have also made a new goal. I am going to learn the lines from the movie V for Vendetta, when V introduces himself:


Voilà! In view, a humble vaudevillian veteran cast vicariously as both victim and villain by the vicissitudes of Fate. This visage, no mere veneer of vanity, is a vestige of the vox populi, now vacant, vanished. However, this valorous visitation of a bygone vexation stands vivified and has vowed to vanquish these venal and virulent vermin vanguarding vice and vouchsafing the violently vicious and voracious violation of volition! The only verdict is vengeance; a vendetta held as a votive, not in vain, for the value and veracity of such shall one day vindicate the vigilant and the virtuous. [laughs] Verily, this vichyssoise of verbiage veers most verbose, so let me simply add that it's my very good honour to meet you and you may call me "V".

I am hoping to finish editing a few more chapters of Evergreen: A Fallen Star, and perhaps I will even finish a short story I began writing last week, which is set in the same alternative universe.

Wish me luck and better health.
- Bonnee.
Posted by Bonnee Crawford at 8:23 PM 4 comments: Links to this post

Back in 2010, while Evergreen was still in one of it's earlier, less-refined drafts, my wonderful English teach, Mrs Dianne Goulding, took the liberty of sending it to Bonnie Goodman; SpineOut Magazine's Subscriptions and Library Manager. Ms Goodman forwarded it to the assistant editor, Lizzie Riley, who wrote back to Ms Goodman about it, and Ms Goodman forwarded Ms Riley's reply to my teacher... who then showed me.

We read Evergreen: A Fallen Star by Bonnee Crawford and quite enjoyed it. Although we've only read the first two chapters the story has good potential; it's an engaging read and a different concept from what you usually see. I think Bonnee could improve the story by trying not to focus on the little things as much - the trick with writing is often trying to find a balance between telling the story and keeping the story rich with detail. The characterisation of the main characters is good - each has a distinctive voice and personality that the reader can identify.

We would encourage Bonnee to keep working at it. We would also encourage her to try and write every day. Even if it's just a few hundred words or one paragraph, if you keep writing you will hone your craft. Try not to be too concerned about editing as she goes. Most authors recommend finish the story as a whole draft then finding parts that need work.

When Bonnee thinks she's ready to send the manuscript off, there is a small publisher, Atlas Productions that has a competition where the winner will have their novel published by the company. She can find out more here: www.atlasproductions.com.au there are other competitions for young writers as well.

It might be worth considering looking into creative writing summer courses and uni courses if she thinks writing is where her future lies. often these courses are taught be experienced and published authors which is a great bonus.

SpineOut will be published later this month. This will be a place Bonnee could submit her work. We will be publishing a selection of submitted work each edition. short stories might be a good regular writing exercise. SpineOut will provide information on writing competitions as well in each issue so if she keeps an eye on these. -Lizzie Riley


Read more »
Posted by Bonnee Crawford at 6:50 PM 4 comments: Links to this post

The Joys of Editing

Going over my novel, again, I still manage to find mistakes, useless and unimportant details and badly-worded scenes. I have deleted so many "moments" within the text that it's not even funny anymore; and what's more, I haven't even gone over HALF of it yet!

But it's worth it. My first chapter alone might be a whole 150 or so words shorter, but that's not necessarily a bad thing. The beginning felt too drawn out as I read it over, and so I've added hints of the conflict sooner. This should also introduce the conflict more smoothly.

Another thing I'm changing are some character names. While all of the main characters have Japanese names, some of the minor characters don't quite fit into the scene. I've SORT OF picked out replacement names and I'll have to change them as I go. Naming characters in your book is like naming your child while you're still pregnant; you've still got time to change your mind if you reconsider, and you want to choose the right name because once it's published, there's no taking it back.

I read an interesting blog post about naming characters and babies here a week or so ago if anyone's interested. 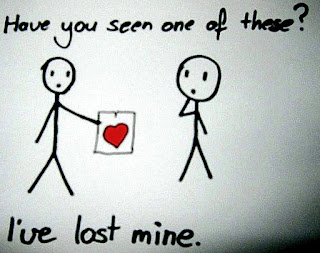 "I've Lost Mine" by yours truly.


In other news, "Emma" is horrible even though I've finished reading it. Never read anything by Jane Austen if you can avoid it. Having said that, if you can manage a Jane Austen book, you can do anything. "The Rugmaker of Mazar-E-Sharif" by Najaf Mazari and Robert Hillman is a breeze in comparison!

Ta-ta for now everyone. Check back soon for more blog updates!
- Bonnee xx

Posted by Bonnee Crawford at 8:37 PM 4 comments: Links to this post

This blog will be about my novel. Includes: Previews/snippets from the novel, about setting, and main character bios.

"The autumn breeze was sweet and refreshing on the skin of the three siblings who came dashing out into the gardens that early morning. The air was pleasantly icy, and its sweetness came from the Evergreens, the fruit trees and the exotic flowers. There was frost on the grass, telling them that winter was approaching fast, and would arrive before autumn’s end. The frost was disturbed as they raced into the gardens."

(Opening paragraph from the novel.)

What is 'Evergreen' about?
Very briefly, three kids saving the world.

Not quite so briefly, but still briefly, 'Evergreen' is about three teenagers, brothers and sisters, who embark on a journey to save the life-source of their world, after a fortuneteller shares a prophecy revealing them to be the ones destine to be the heroes.

Who are these characters anyway? What are their names?
For this, I'll give you a bit of a character bio for the main protagonists and antagonists.

First up, the good guys!

Chihiro: The 19-year-old older sister of the Imperial siblings. Chihiro is a motherly figure for her younger brother and sister and an understanding, thoughtful friend whom they confide in and often receive good advice from. She is strong willed, influential, intelligent and the immediate heir to the Imperial Throne providing she marries before the responsibility is passed down.

Zutto: The middle child of 16. He is quiet and pessimistic and doesn't choose to socialize with anyone beyond his two sisters. Chihiro is his trustworthy best friend, and he would do anything to keep his precious little sister safe. If Chihiro hasn't married by the time the responsibilities of the throne are ready to be passed down, it will be his place to step up.

Sakura: The youngest of the three who turns 13 early into the story. Sakura is still very childish and has never expected the responsibilities of the throne to end up falling on her, and therefore does not act so level-headed and responsible as her two older siblings do. She looks up to them and depends on them. Zutto is her best friend and his opinion is most important to her.

And now for the bad guys!

The Witch of the White Lands: This evil and ancient woman has been waiting thousands of years to take her revenge on the human race for the injustice they did her by rejecting her dark magic and therefore rejecting everything she was. She can feel when the Evergreen Trees begin to fail and her aim is to use the Middle Kingdom's crisis to her advantage. But to achieve this, she has to get past the Imperial Children, and to save the world, they have to get past her.

The Witch of Thorns: The Witch of the White Lands's twin sister who lives in another realm of their universe; the same realm in which the Imperial Children will find the answer to their crisis.

"“Nightingale, sparrow, butterfly
Far from home where they will fly
Up the mountain to a better place
Where the enemy will not show her face
As they’re searching for a star
Back home we wonder where they are
And hope they come back to us in time
Before I sing my final rhyme
Nightingale, sparrow; fly on home
My dear butterfly, cease to roam
Time is short so come home soon
Before our Kingdom meets its doom…”"
(The fortune-teller's prophecy.)

Any questions?
Leave me a comment if you read this, anonymous comments are welcome.
- Bonnee.
Posted by Bonnee Crawford at 9:26 PM 8 comments: Links to this post