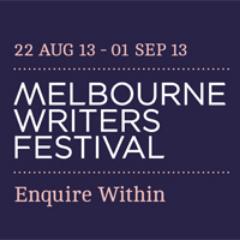 I am excited to be living in Melbourne, as it means that I have greater access to the Melbourne Writers Festival events this year.

In particular, I will be taking advantage of the numerous free events whenever I don't have classes, including the First Nations Australia Writers event, which I hope to use as a part of my news story assignment for my journalism unit. I was able to do something similar last trimester by combining a journalism new story assignment with my attendance of an event held by the Emerging Writers Festival. I attended and reported on the EWF poetry cafe event back in May, at which I had a chance to see Randall Stephens and Maxine Beneba Clarke read some of their works aloud to an audience.

Scrolling through the list of free events MWF is hosting, I noticed that Maxine Beneba Clarke is launching her new collection Nothing Here Needs Fixing, so I might try and make it to that event too. Of course, I've made a huge list of events I'd like to go to that are being hosted by the MWF this year, and I've got my fingers crossed that I'll be able to make it to most of them. I'll surely be taking advantage of the fact that living in Melbourne means I have better access to all sorts of writerly events and festivals.

In other news, I had some of my high-school friends from the year-level below me contact me earlier this week to ask for help and advice on one of their tests in literature, regarding the need to write an imaginative piece which mimics the style of Haruki Murakami in his collection of short stories after the quake. Some of you who were with me last year might recall how in love with Murakami and this collection of short stories I was when we studied it. Apparently, the literature teacher read my piece to them as an example, because I got 100% on this piece. I was really flattered to find this out and even more so that a couple of the current students would contact me for advice. So I'm hoping they all did well and I secretly wish I'd been sitting that test with them, because it was so much fun and I'd literally take any excuse to study Haruki Murakami again. They all think I'm crazy, but I swear it's not a bad thing!

Last of all, I believe the mid-trimester break couldn't have come at a better time. It's not QUITE half-way through the trimester, but I am once again sick and looking forward to the next week of recovering, catching up on Breaking Bad, writing, and getting some assignments done (by which I mean procrastinating...). So I don't get to officially learn anything this week, though I'm sure I'll gain some sort of new knowledge without being in a classroom.

Any Aussies out there going to the Melbourne Writers Festival? Any other festivals on out there that my fellow bloggers are attending? Past success come back to haunt you? Up to date with Breaking Bad? Assignments? Let me know what's going on with YOU!