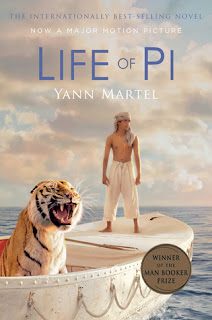 Over the mid-year uni break, I started reading Life of Pi by Yann Martel. I'd seen the movie in cinemas with a friend, back in the summer, and I'd wanted to read the book ever since. I am still a firm believer that, at least in most cases, the book is better than the movie. Although Ang Lee did a marvelous job directing the motion picture and the visuals were truly spectacular, Yann Martel wrote this story with equal beauty, and without adding unnecessary Hollywood subplots.

Life of Pi follows the journey of a young Indian boy, Piscine Molitor Patel, known to all as Pi, as he searches for new ways to show his faith in God by practicing multiple religions, and as he maintains his faith through a terrifying, life-changing ordeal: the sinking of the cargo ship that was transporting his family from India to Canada, of which he is the sole survivor, stranded in the Pacific Ocean in a lifeboat with a fully grown male Bengal tiger for 227 days.

When I started reading the book, I thought the beginning was slow and at some points a little boring. However, most of it was necessary in order to understand Pi's faith in God, which was essentially what stopped him from losing hope during the ordeal. Growing up, Pi is the son of a zookeeper in Pondicherry and he knows plenty about the animals his father kept, including the dangers of Richard Parker, a Bengal tiger who had been brought to them as a cub and grown in captivity. When his family's voyage to Canada begins, the animals are loaded onto the Japanese cargo ship under sedatives. One night, while they sail across the Pacific, the cargo ship sudden sinks and Pi is left stranded on a lifeboat with a handful of animals, who all eventually die, except for Richard Parker, the fully grown male Bengal tiger. Despite Pi's fear of drowning, dying of malnutrition, and becoming Richard Parker's next meal, he has a strange determination to survive the ordeal, which is propelled both by his fears and by his faith in God. For 227 days, Pi manages to survive, literally in the same boat as Richard Parker, until they eventually wash ashore.

One of the things I really came to like about this book was that the ending wasn't a complete happily ever after. Pi suffered through an awful experience and somehow came out alive, but alone. In the end, even after 227 days at sea together, Richard Parker abandons him as soon as they find land. But Pi has learned a great many things about himself, about life, about his capacity for faith, and about willpower. Pi was forced to do things he would never have considered doing before the ordeal and had to improvise ways to practice his faith, in order to both stay alive and keep himself from despair. He was lucky in one of the most unlucky and unlikely ways and left with only his own life, which he had to rebuild alone. Yann Martel illustrated an inspiring determination and will to survive, the strength of human instinct, faith, and our ability to learn through experience.

I've now read 5/24 books for my 2013 Reading Challenge on Goodreads. I'm a little behind, but I know I can make up for it once classes are over for the year.

Have you read Life of Pi, or seen the movie? Have you ever been stranded in a lifeboat with a tiger? What else have you been reading?