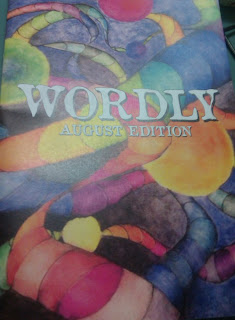 The Deakin Writers Club magazine Wordly is now officially being sponsored by the Deakin University Students Association and we are now a cross-campus magazine, meaning that we are accepting work from not just the Melbourne campus but the other four campuses too. The August edition is the coolest yet, with no theme, more content than usual and a student-designed cover (previous editions were more like newsletters with little to no colour and no cover.) Oh, and they published a poem I wrote. That is pretty cool too.

I'm super excited for the September edition. The new theme is 'space' (any definition and interpretation of the word is acceptable) and I got a little ahead of myself the other night and prepared a piece for submission. I'm surprisingly pleased with what I came up with and shocked at how out-there it is. Fingers crossed that the Wordly production team like it enough to give it a spot in the next edition. I've already asked one of my friends to take a look over it and offer some constructive criticism and hopefully I can convince some other people to help me workshop.

Speaking of workshopping, it was my turn to present a partial draft of my Writing Spaces assignment in a tutorial. Overall, good feedback (from fellow students... the Dreadful One has continued to be severely disagreeble, but due to the lack of guidance we were given for the assignment, I'm going to have to completely re-write my piece if I want to get a good mark from her). Despite all that, I've really loved being in a workshopping environment again.

On that note, I'm considering getting a workshopping group started on res just for the fun of it. The Deakin Writers Club sometimes organises workshops for members across the campus as a whole, but they are not run often and I think it would be a good chance to meet some of the writers I actually live with and build a bit of a community. Of course, I have to get my head around organising my time and assignments first. I've been extremely lazy this trimester and all of my due dates are suddenly around the corner and I've got nothing done... and hardly anything started! So, assignments first, and then I'll see about arranging resident workshops. I'm a little excited to get socialising with some new Aussie writers... and of course the international students are welcome too!

Aussie writers... that reminds me! Melbourne Writers Festival starts today and I'll be attending at least one event tomorrow as a part of my journalism assignment, and hopefully I'll get a chance to attend a few more over the next couple of weeks. Also, my friend EJ has started a new blog, in which she'll probably post about writing and life in general here in Australia, so go and check her out. I'm currently trying to con her into doing a guest post here on my blog, so go and pester her about that too!

This post ended up being a couple of paragraphs longer than I was intending, so I'm going to leave it there and get started on my assignments. Or continue procrastinating elsewhere.

Any news from my writerly friends out there on their latest progress? Who's been workshopping recently? Anyone going to the Melbourne Writers Festival?